From 33C3_Public_Wiki
Jump to: navigation, search

Passcode of the day: TALE (on the hint paper)

Philippe registered on Day 1, but didn't really join a team. He decided to go to talks and walk around. This is his first CCC Congress.

Passcode of the day: FUSION

Philippe walked to the Travel Agency at lunch time, and met a group of people forming a team. The organiser was Claudia (skill: organise). We soon decided to go to the tea house and have a cup of tea, then came up with the team name -- 33☕3. Claudia put our name in the registration book of No Game with beautiful paintings of ☕.

We tried "TALE" everywhere and it didn't do, as we didn't know the passcode changes everyday. Lot of time spent...

We didn't know the Travel Agency gave "the first hint of the day" every morning.

Douglas and other people decoded the alphabet system, and we went to find all the monoliths. Our list of monoliths is here: https://gist.github.com/anonymous/12033869ed2525fa17dd533c0531c74b

And there are several non-monolith terminals and clues,

We realised our team is not fully skilled (with 9 types of skills), so we recruited Oliver and Martin Geno.

Oliver worked on reading the content of the key (mount /dev/sda /mnt). It's a vfat with only 3 files.

m3.jpg is the portrait of Yvan Attal.

Martin Geno (?) inserted the key to a random monolith (we chose "care") and typed the passcode of the day, and we got the message: 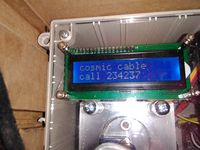 Philippe dialed with his DECT phone, and a male answered.

Philippe passed the phone to Claudia, a native German speaker. Then the male on the other end said,

We thought it's something about Dr. Who, and rushed to find the blue telephone cabin in the assembly. However, it's a false clue.

We spent a lot of time here, until Douglas went and asked the Travel Agency, who said it's not the expected audio file...

They said the number 234237 was right, but Audio file was wrong. The correct audio file (a 7 minute waiting loop, and a web address) leads to a CTF. And now the really GOOD NEWS: That CFT starts with a program written in Elymas. We're given the text directly, which was "CTF http://www.stoptellingstories.de/".

People wanted to join activities and Philippe had a talk in Saal 6. After the talk, he met Marin of Die "LAZ0R" Banden CATS. He listened to what the Travel Agency told them and there seemed to be a gathering. However, it's in German. As a lame translator, Philippe doesn't translate German at all...

Philippe also found many people posting bills in the Travel Agency, such as ... 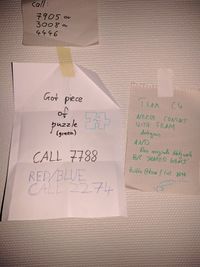 World is not fair, as we have the developer of Elymas in our team! (grin)

Passcode of the day: WORKS FOR ME

We gathered at the tea corner again and try to solve the Elymas CTF. By using the code that Douglas found at a 32C2 write-up (https://blukat29.github.io/2015/12/32c3ctf-ey_or/), Philippe brute-forced it and found this key sequence:

By entering the key sequence, we got the lyrics of a song.

However, this is NOT the answer!!! Jens figured out this was in 32C3 CTF, as a reverse Elymas. The process was too complicated to understand, so Jens gave the answer:

We spent a lot of time at the monolith of organise. Markus found a cut line and an unpowered Arduino Mega at the back or organise. Philippe powered it up with power bank and a USB A connector; however, it led us to nowhere.

Philippe went to the Travel Agency and got the answer --- The story line goes forward, and we are already in the next day. We were supposed to solve the Elymas puzzle yesterday. So we don't need the capsule and the power in organise anymore ...

It seemed that our team wasn't running this story line. However, Oliver has found something. Das angehängte Zeichen lag auf dem Tardis in Halle 3. 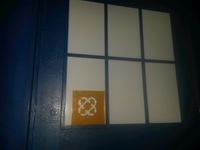 After typing the passcode "WORKS FOR ME" in any terminal, we got the response "Bring the Scissors to Tavern". We found a girl with very big scissors, and brought her to the tavern. The girl didn't tell us anything, but asked if we want to keep the sausages. We refused, and she disappeared.

There was a Raspberry Pi connected to an old white-black portal TV. However, we don't know how to use it. The password is not WURST nor WUERSTE.

Later on, another team came and robbed the scissors ("Can you give me your scissors? - Why not?") and some other guy took the sausages.

Summoned to the lounge

Suddenly, there was a message from Travel Agency calling all teams to the lounge to find the QR Code. We found very hard, but just couldn't find anything.

There was a blue pond in the lounge, where a hidden key hole was located behind one of the numbers. Someone from another team turned his key, and the spotlight flashed white. A girl came and distributed pieces of paper with QR Code, which decodes to the URL:

During the break, Markus and Philippe felt quite boring and decided to find something. They found words on a treadmill saying "ganz oben liest jemensch". However, it didn't bring them anywhere...

Feeling bad, they went to the Travel Agency and the girls at desk asked them to think backwards. Markus had this idea of inputting "works for me" backwards, and got at least 2 different messages. First a pastebin: http://pastebin.com/raw/t20Lbpbx ; then a mission.

The missions were at least

However, we didn't do anything.

From a piece of paper in the Travel Agency, Oliver knew we got to prepare for his no-birthday with the following items: napkin, tea, tea pot, plant, candle, and cake.

People gathered at 8pm near the Tavern, and celebrated Hatter's no-birthday.

Ertan and Claudia got a stick of "dynamite" (and the other groups too). Every group got One. Every stick has a number (0 or 1) and a letter on it. We have to build a word and then get a binary number. The Code revealed when it was used in the lounge.

There were new clues and new papers in the Travel Agency every day and night. Here's what I got. 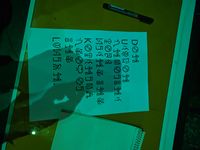 And two other pieces of paper led people to the Utopia.

Passcode of the day: no passcode, just turn the key.

Everyone was tired and wanted to at least attend some talks.

Markus found there was a secret room in the lounge, lock-code 1234, with a book in the room where one could leave the name.

Martin Geno was the last one who played the game. He sent two pictures. 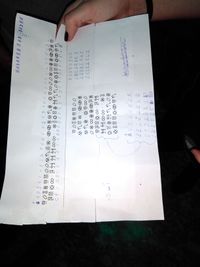 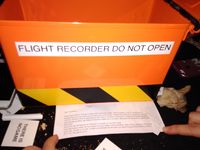 We were randomly given puzzles in envelops. Not really sure what we would do with them. Other team was collecting the puzzles. 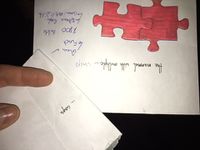 We decided the only way to "win" the game is to change the rules. Hence, we asked team members to give their contact address, and send the key around along with a tiny gift. Hopefully we will get the key back in 34C3.

What was not there

After checking the write-ups in NoGameInformation, it seemed our team wasn't in the following lines: