Projects:We'll Make Us A Gnu One 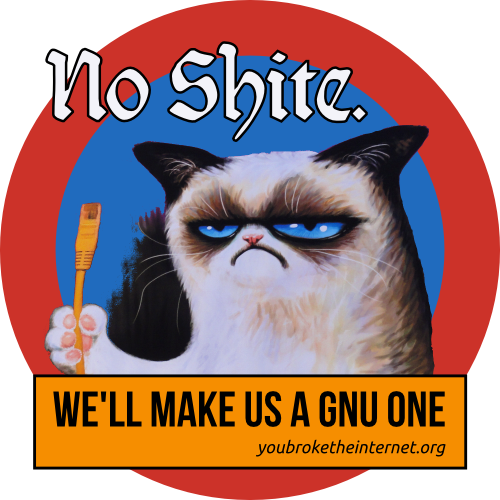 Some folks broke the Internet we knew, or rather… the broke it harder than we thought. But we can still turn things around with a good combined Mikado move of technology and activism. We just have to dig deeper than before.

We have several actually functional implementations of new Internet routing subsystems on their way to become a full replacement of the traditional TCP/IP stack. We can get started creating an Internet which defies surveillance. And we should do it bottom up, because protection glued on top never worked as well – especially concerning the important act of hiding who is talking to whom.

Check out the videos of our sessions at 30c3 to understand what we are up to. We chickened out at 31c3 but we are back for the Camp!

…how would a new Internet work

In the early 2000s a few projects started out writing a new automatic routing system for the Internet using Distributed Hashtable technology. Some of these you should have heard of… Netsukuku, cjdns, CCNx. GNUnet even comes with protection against sybil attacks and an advanced way to address the problem of naming. The code is out. It works. You can do stuff like VPNs with friends and file sharing over it, as an overlay over the existing Internet or as an independent mesh network.

…why is a new Internet routing system the answer

That's a long story and probably we should do several sessions about it. It has to do with end-to-end encryption and authentication being natural and automatic if the public key is the routing address. It has to do with making authentication automatic and abolishing the broken concept of "passwords" as a means to make anything secure. It has to do with having the option to evade the surveilled Internet by mesh networking (Hello, EDN!). To bypass the systemic problems of TCP, DNS, X.509 and even the POSIX socket API which make untraceability harder to achieve by the way they were designed. But there's more to it…

…how to get started using it

Wooha, we get to do workshops that actually deploy new (GNU?) Internet routing systems on laptops or OpenWRT hardware… See below for sessions.

…how to adapt applications to operate in distributed thinking

The easy way is to do the „hidden service“ kind of deployment… in the case of GNUnet we run some service on port X of our nickname.gnu address and let our peers connect to it… but we should also think into the future: Servers are single points of surveillance and failure… the old client/server architecture is part of the problem as it introduces possibilities for global active attackers to apply traffic shaping de-anonymization. So let's move on from the hidden service and exit node paradigms and think in native distributed applications that defy this kind of attack by design! The GAP file sharing protocol can be a nice example.

So activism has hit the crisis? People are no longer taking to the street against surveillance? Let's turn around the narrative. Let's invite the people onto the streets in favour of the introduction of a better Internet that respects their civil rights without them having to change much of anything (yeah well, they need a new Internet stack on their laptops and mobile phones, but that can be automated by software update…).

Let's learn from the success of Berlin's Tempelhofer Feld: A vision of a better future enshrined in a legislation proposal stood at the foundation of a clear and simple message for millions of citizen they could adhere and subscribe to… and turn that legislation into effective law, liberating the field of the former Tempelhof airport for generations to come.

We can achieve the same on a national or European scale with the introduction of a liberty-preserving Internet. First work on the suitable legislation, then boil it down to simple and clear messages and form a movement that convinces people, NGOs, parties and even commissions to dare to think outside the box of the existing Internet.

Once the political momentum is there, the actual implementations will get the necessary attention to get finalised for worldwide deployment. We can put IP4, IPv6 and even the Border Gateway Protocol into the big drawer of legacy technologies. Still used in many places, but no longer essential – no longer welcome when it comes to private communications, the foundation of democracy. Let's upgrade!

…how to get our opponents to like our plan

So you think everyone will be against such a crazy law initiative? Think again. Who is really losing here?

→ The governments are in a competition on getting the greatest crazy amounts of big data on human activity on the planet, corroding the foundations of the democracy some of them were supposed to defend. Leaving this competition would be strategic madness from their perspective, so they focus on achieving the opposite: legalising surveillance! Should we empower them to deploy an unsurveillable Internet in their own country, it gives them a huge strategic advantage and removes the number one reason to hold on to bulk surveillance. We can still provide for ways to support law enforcement, but in a way that doesn't question democratic fundamentals. In fact by making end-to-end authenticity and security the default we eliminate a lot of what currently bothers them as so-called „cybercrime“. Also, cyber-espionage and the need for the entire industry to fix its security assets disappears into a puff of hot air as it has been tackled upstream.

→ Most of the world's industry has been cut out of large parts of the Internet business by a crazy development that gave a few large US companies the permission to develop parasitic business models on anti-constitutional infringements of civil rights and even grow into a state of near-monopoly oligarchy. Should we require the world wide web to operate on top of the GNU Internet (and include an article that forbids websites to include content from third parties), the Faceboogle business models would collapse like a soufflé. No more does it work out to have citizen pay for services by allowing them to trade in information that makes them predictable or reveals things about their friends (both things they have no right to trade away but rather a constitutional obligation to protect). Suddenly an open and fair marketplace is made that gives all businesses, big and small, a new secure way to interact with customers, and customers a secure way to remain anonymous or pseudonymous while interacting with corporations for as long as they prefer. To avoid getting on the slippery slope of data prostitution again, it is overdue to introduce an anonymous micropayment system that empowers us to pay for fair service in an ethically acceptable way.

YMMV but we think all European governments and businesses have an interest in supporting a GNU Internet – they just need to be told. So who are our real opponents here? Who is left that really really has an interest in surveillance and the demise of democracy? Some large cloud corporations? Some corrupt governments? In the end not even them will want to stand on the wrong side of history. So let's start stepping out of the cloud's shadow into the Camp's sunlight.

««« Some weeks before the Camp in Dresden and downtown Berlin
««« 2015-08-03 thru -09, Battlemesh in Slovenia!
««« Most sessions on Day 4 of the Camp, first at LQDC, then in HackCenter 3
««« Aftercamp on "Day 6": Session:Wednesday Berlin YoubroketheGrill Chill Out in Neukölln…

Think our ideas are crazy? Come to challenge them! Think we can achieve more with less drastic measures? Let us know! We are planning meetings of various kinds. Click on the headlines for the specific session hacktivity pages.

GNUnet announced that the implementation of Byzantine Resilient Random Membership Sampling is only months away from today. This is the building block that should allow pk-routing networks to create onion circuits without depending on directory authorities and the implicit trust graph.

An introduction to this project.

Invited guests: the authors of trackography.org

A hyperlink is a conscious choice to move from one website to the next. The web was not meant to collect stuff from all sorts of places and be an ideal surveillance platform in the process. Can we make third party HTML-include blockers so pervasive that the business model of cartographing humanity no longer works, or should we consider legal action: forbidding third party includes by law so that businesses understand they have to monetize more reasonably than by abusing once well-intended HTML features. That is the approach our legislation initiative for a constitutional Internet is currently taking, but maybe you have better ideas.

Anonymous electronic micropayment that integrates with the existing economy rather than trying to bypass it. This is what it takes to migrate Internet's capitalism away from paying with your data (the Wild West Web mentioned above) to an Internet where you either get the things really for free or you pay sums that can be so moderate that it doesn't mean anything to you but it still sums up for the author of an article, resource or work of art. Needless to say, GNU Taler is designed to integrate with a „GNU Internet.“ Watch the video.

Weeks ahead of the Camp, EDN activists are teaming up to get GNUnet running on Freifunk hardware with the intention of trying out its new self-organizing authority-free mesh routing algorithms.

Session:Comparing Architectures for a new Internet

Inviting Maidsafe, Ethereum and GNUnet to compare strengths and weaknesses of each of the approaches and explore potentials of collaboration.

CADET is GNUnet's public-key based routing system. What if quantum computing isn't just abstract theory? How would we make GNUnet resistant against that? Some people have already thought about that…

So the Tor Hidden services DHT is prone to plenty of attacks. Some Tor developers have begun integrating the GNU Name System as an alternative hidden service strategy. How's progress? How do concepts like Web of Trust and Social Graph play into this? We had long discussions on the Tor mailing lists that we should continue in person.

Session:How to do mail, social and secure multicast over GNUnet

What is still missing to enjoy a GNUnet-based mail system? How would it compare to other „secure mail alternatives“ like Bitmessage, Retroshare, I2P-Bote, Pond? Does it make sense to plan a mail system without taking the entire social networking use case in consideration? What about the scalability challenge… how can the way cloud technology scales be translated into a distributed architecture? secushare has been working on GNUnet's multicast & pubsub implementation, but many details are still to be worked out.

Sounds surreal? Well that is what some GNU Guix developers are working on. Not only we get to have trustworthy GNU/Linux without the burden of recompilation, we even get it anonymously!

Create easy to install packages of the now available GNUnet protocol stack, put them onto your computers and OpenWRTs. Try out its anonymous file sharing (hey! it actually works!) and Social VPN features.

A meetup/info exchange without agenda for current and future Tor relay operators. You operate a Tor relay? Thinking about running one? Come by and talk to other operators!

Great applause and thanks to La Quadrature for hosting us and providing us with an amazing continuous influx of Tea all the time during socializing and networking! Thanks also to the usual suspects for making one more legendary CCCamp happen! Thanks to the interested folks that visited our sessions… please kepp on talking about these subjects and please get back to us to stay in touch!