Radio communication over a distance of at least 2 light-seconds using the Moon as reflector.

(If you are trying to find us just look out for the big 2 stacked antennas, they can't be overlooked)

We are not the first people doing EME, so we're fairly sure we won't blow up the moon (we're not using any really strong lasers).

Project Moonbounce is a Project done by the members of MetaFunk, the Amateur-radio group of the Vienna-based hackerspace Metalab, in cooperation with Chaoswelle. It is a part of LeiwandVille.

There is a Talk about the Project on Saturday 12:00 in the Kourou Shelter [1]

Most EME communications are on the 2 meter (144-146MHz ITU region 1) amateur radio band.

We will be using two horizontal stacked 5m long yagi antennas on an about 6m high antenna mast. We are using a 2m high-power linear power amplifier for transmitting and a low noise amplifier (LNA) to amplify the received signals. 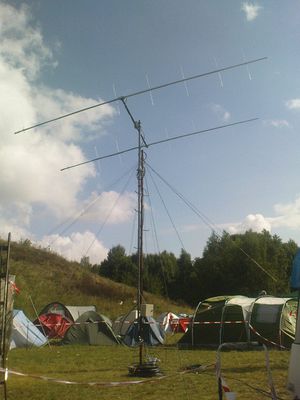 First developments in using the moon as passive repeater have been made in the early 1950s by the United States Navy. It was ment to be a reliable communication method for two radio stations which were unable to communicate by shortwave radio because of bad propagation.

It's military and commercial use became obsolete with the deployment of artificial satellites.

With this setup slightly modified it is also possible to do satellite/ISS communication, we might do this the other half of the day.

Until Sun, 14th August 2011 we have been heard from all over the Northern Hemisphere but were not able to decode more than some short burst. So no 2-way QSO due to QRM yet. It's a success anayway - setup is working and we will try again tonight. 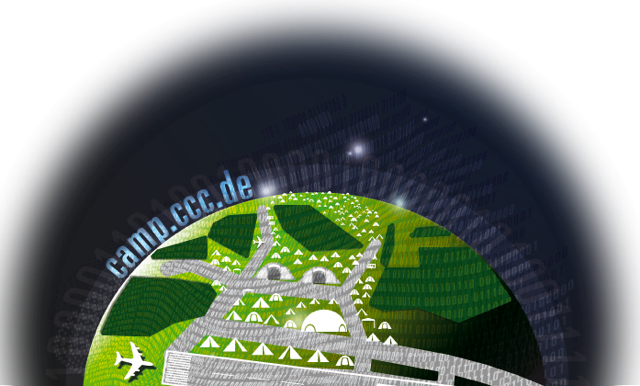