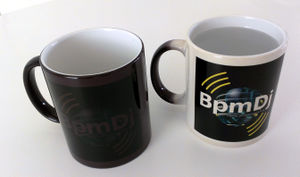 BpmDj is an audio project that brings you the best of audio analysis in a concise and user friendly package. With the Android app, you can create Mixtapes in no time. Under the hood it packs one of the most accurate BPM counter in existence, a novel visualization method, called beatgraphs, as well as a nearest neighbor search to suggest similar songs based on loudness, spectral and rhythmic characteristics.

This year, we won't talk about this project anymore, but instead give you the opportunity to test the software yourself. Actually, we want you to come to us with ~100 tracks and an idea for a mix. We will then sit together and create that mix.

If the mix is longer than an hour and contains at least 10 songs, you earn one of the magic BpmDj cups. When cold they are mostly dark. When warm, they show the BpmDj logo, with on the backside the text 'Stay tuned, stay sharp, keep mixing'.