This is a community-driven open source project building a modern autonomously flying multicopter.

The Universal Aerial Video Platform (UAVP) is a flying object ideally suited for aerial photography but also for fun flying, whether indoors or outdoors.

The project uses mainly standard RC model components, so it is basically a model aircraft. There are virtually no limits in size and lifting weights. Since UAVPs use high quality gyros to allow stable flight, it is much easier to pilot than model helicopters.

Most of the NG developers came to the Quadcopter hobby by flying a Quadcopter of The Original UAVP Project or of a commercial project called The MK Project.

This was in summer 2007, the original UAVP was out for half a year and all over the world UAVPs started to get built. The Mikrokopter was quite new then and the community was able to build Mikrokopters (MKs) for 3 months, but the real MK boom had yet to happen...

At that time, many of us started dreaming of bigger and more powerful processors, peripherials and sensors. The current projects seemed not to be able to scale according to our needs, so the idea of something new was born.

In April 2008, about a year later, there were about 500 UAVPs airborne around the world!

Having flown both of these other open projects some of us decided that they do not offer the resources we would like to have on our copters. Especially when looking into the future it seemed that none of them have the scaling possibilities needed. Studying the available processors we realized that we need to switch processor types to get the computing power we dreamed of. Neither PIC nor Atmel could provide what we needed.

In the end we decided to go for an ARM7 and started the Next Generation Quadcopter Project.

The development of free Open Source Quadcopter software and hardware framework for further research based on a high performance CPU. 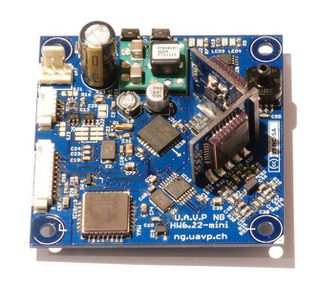 The HW-0.10 is airborne since january 2008! The system has been flown and the software has been extended with a lot of new features since then.

A new hardware revision called HW-0.20 has been worked on over summer 2008 and the first prototypes were produced some weeks before 25C3. The new hardware was airborne in december 2008. After 25C3 we improved the flight control software a lot and started work on the peripherial controllers of the new hardware.

In summer 2009 we started work on the next hardware revision called HW-0.21. We finished work in june 2009 and produced enough boards for all beta testers and developers. The hardware was airborne in august 2009. 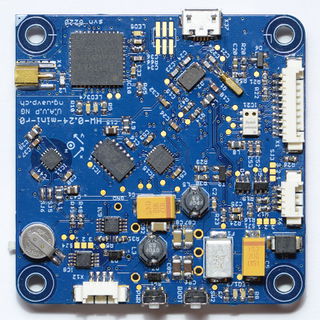 Discovering small problems and print issues we decided to produce another hardware revision 0.22 fixing those. We did small changes in the print and design and incoperated them into HW-0.22.

HW-0.22 was produced in bigger quantity in preparation of the first public release. At the 26C3 we did a first public hardware release of HW-0.22. The HW-0.22 PCB are available in our non-profit Shop.

The NGOS source code was publicly released under a GPLv3 license at 27C3 in 2010, after 3.5 years of development.

A new hardware revision called HW-0.23-mini was designed in late 2011, incorporating a new combined digital 3D accelerometer and gyro in one sensor making room for a GPS sensor directly on the main flight control board. This version was produced and we succeeded in getting it airborne at the 28c3 congress in 2011. It was tested further in 2012 and our experiences with the board lead to the final design of HW-0.24-mini which we brought to 29C3 and released to the public.

The new HW-0.24-mini performed very well and many pilots upgraded to the new hardware version at 29c3 or later during 2013.

At the 29c3 congress our team started to design the next generation hardware design, called HW-0.30. It will incoperate two STM32F407 CPUs connected to a shared 16kb dual-port RAM for near instanious data sharing between the processors. The dual-port RAM will allow us to share sensory data and controller information in near real-time between the two CPUs. HW-0.30 features fully digital sensory equipment as well as two high speed CAN bus transeivers allowing for an optional CAN bus Brushless Controller (BLC) ring. Included on the board is a JTAG adapter which is connected to a 4 port high-speed USB 2.0 hub connecting all the different USB busses.

HW-0.30 was designed to be a "big" developer version using 80x80mm PCB and we intent do miniaturize it later on (while dropping one STM32F4 and the dual-port RAM) to the standard footprint of 55x55mm calling it HW-0.30-mini. 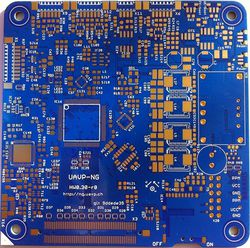 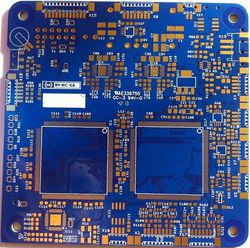 On the 30C3 we plan to work on the new HW-0.30 and the needed software changes for it. It incoperates two STM32F4 and a dual-port RAM besides a optional CAN bus ring for CAN-BLCs and many more new features. The new hardware is already produced and we hope to get it airborne before 30C3.

Also we plan to further develop NGOS and support more and more features of the new hardware generation. There's still a lot to do.

We're looking forward to discuss, improve upon and show prototypes of them on 30C3.

The initiators of the UAVP-NG project had a free and open project in mind. The boards have beeen made available to the public and the software was released soon afterwards. We have become an international team from all over the world.

We hope to be able to provide a platform for new ideas and new research on the Quadcopter topic. The firmware is built modular and allows different closed-loop control algorithms at the same time to allow different developers to share and compare their algorithms and designs.

Everybody - who can agree to the idea of a non-profit, non-commercial Open Source project - is invited to join us and our project on IRC or in the NG Forum! 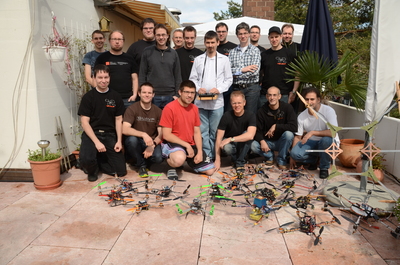 Events at the Congress

The following events will take place during different times at the 30c3: