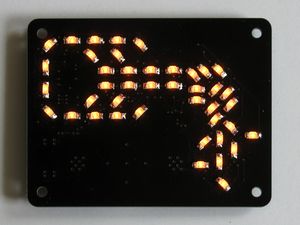 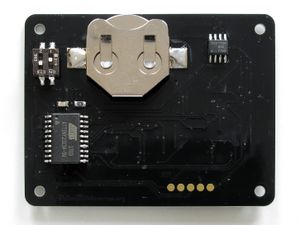 The BlinkenArea is a village in the cluster Singularity City and a project group of people who are interested in computers and electronics and in a creative handling of both of it. We offer kits in different levels of difficulty and will also provide space and equipment for soldering. The most important kit at Camp 2019 will be the new and first published Chaosknoten SMD kit.

Also on Chaos Communication Camp 2019, there will be a BlinkenArea. In the past 16 years since our foundation, we have not only implemented light and media art installations. In addition, we have teached soldering and enabled access to microcontroller programming at several events. During the brainstorming what to do at Camp 2019, we realized that the official Logo of CCC, the "Chaosknoten", does not exist yet as soldering kit. As Wau Holland has created the logo, we obtained permission to provide a Chaosknoten soldering kit from "Wau Holland Stiftung". We just have to provide the hardware design and the firmware under a free license and are not allowed to make profit - which has anyways been our plan.

After getting the permission, we started working at the kit and less than a month later, there is a working prototype. The "Chaosknoten" consists of 42 LEDs, the printed circuit board and 6 other parts. The LEDs can be individually addressed and show 16 different brightness levels. The default firmware shows a few animations. The pins required for changing the firmware are available as pads on the back side of the board, so programming new animations is possible. A coin cell of type CR2032 supplies the power to the kit. It usually lasts for multiple days of operation until the LEDs do not light up any more.

For being able to estimate how many boards and parts we should order and to Camp 2019, we need your help. Based on our current calculations, we estimate the kit price to be 15 € 10 €. As we usually receive a number of requests for complete devices (i.e. everything soldered already), we also did the estimation for this variant, which resulted in a price of 25 € for a completed device. There will be only one option for the color of the LEDs: these will be orange, because of the optimum the price performance ratio of those LEDs. In case you would like to get a "Chaosknoten" kit or a completed "Chaosknoten", please write an email to camp2019@blinkenarea.org. For Camp 2019 there is a waitlist for kits not picked up by day 2 and/or if you want a pre-order for the 36C3, please write an email to camp2019@blinkenarea.org.

Please write us only how many kits / completed "Chaosknoten" you would like to get and if you want to reserve them bindingly. We will keep reserved "Chaosknoten" until day 2 of the Camp. After this, they will be for sale to everybody. Please do not write wishes or questions in you email, we only want to count the number of "Chosknoten". Feel free to post questions in the comments, so other people, who might have the same question, will be able to read the answer.