This tricycle has been been built to carry water (100l) and then to deliver it with an integrated pump. Propulsion is achieved through 2 x 24V 250W 12 hub motors wheels. Throttle is determined by pedal rotation speed and direction via an arduino. It gives the impression that the driver is really doing the work. To brake, rotate the pedals in the opposite direction, it's not re-generative at all (changing direction is achieved on the not reverse capable controller with 3 XOR gate on the hall sensors, so no need to stop before changing direction).

It has been driven mostly by kids to deliver water to campers since 3 years at a festival in Switzerland.

Kids are becoming lazy, it's time to test without driver ;)

A custom windscreen wiper servo was just added to the handlebar. The idea is to test with a pair of rtklib compatible gps receiver if a programmed track can be followed.

It's the first steps, no lidar neither a bumper, but a human will always be ready to push the emergency switch. 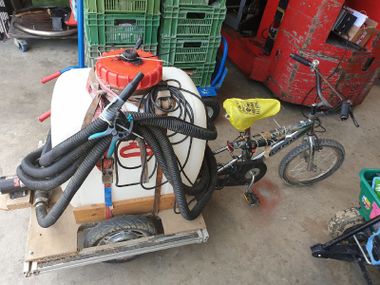 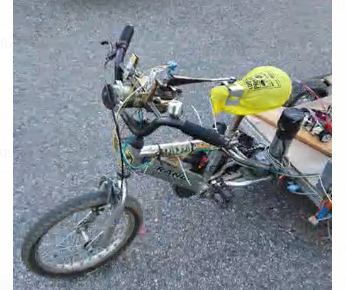 Advancements during the camp

Gps RTK integration is not going very well, even with the help of Quanten from Kraut Space. It seems difficult and eventually not feasible to use the UBlox - EVK-7P

But at least another very cool feature has been added to the tricycle: the ability to follow a fiducial marker using opencv3 and the so cool aruco library. It can go forward and reverse, just trying to maintain direction and distance.