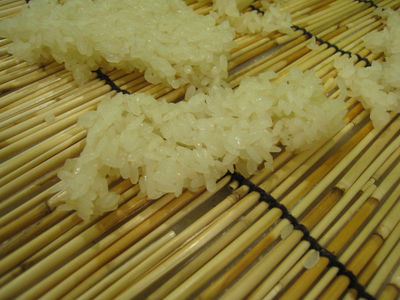 This workshop is about preparation of alcoholic beverage called Makgeolli. You will learn how to prepare your rice so it is optimal for inoculation with the fermentation culture called nuruk. You will also help to harvest the brew and taste this and several other brews to get better idea about the appropriate flavour. You will obtain manual and nuruk culture for your first batch or two.

Makgeolli is a traditional Korean alcoholic beverage made from variety of rice types and nuruk culture. In this workshop we will prepare the single fermented makgeolli called "Takjangdzu". We will focus on a proper rice preparation which includes intensive washing, drying and steaming (or boiling), cooling and subsequent inoculation of the rice with the active culture in this case nuruk. If everything goes well we will also harvest the takjangdzu which was already pre-prepared and taste it. The alternative options to using nuruk as a culture will be discussed, suggesting either kōji (Aspergillus oryzae) or yeast (Saccharomyces cerevisiae). The workshop will take approximately 2 hours, the ingredient costs etc. should be within €5-10, if you chip in more great but as usually no one will be turned for lack of funds. You will be leaving with your batch and one of the culture for your next few experiments